The team at Alpan Orthodontics works to enhance smiles for a lifetime. We have locations in Los Angeles, Century City, & Woodland Hills to help serve your orthodontic needs. Dr. David Alpan has been a practicing orthodontist since 1999—proudly part of a third generation in his family in the field of dentistry. Perhaps it’s because the passion runs in the family that Dr. Alpan cares for all his patients as if they were also his own family.

Nothing says more about you then a happy, healthy, balanced, symmetric, awesome wide smile. That’s why Dr. Alpan focuses on helping your smile function in harmony with the bite, airway and TMJ, making sure your smile will match perfectly at any age. He began tailoring his practice in 2015 around airway orthodontics, preventing teeth misalignment in growing children, and treating obstructive sleep apnea in adults. Together with his team, Dr. Alpan leverages the expertise he’s gained in these areas to make sure each patient is carefully diagnosed and given a thorough treatment plan. 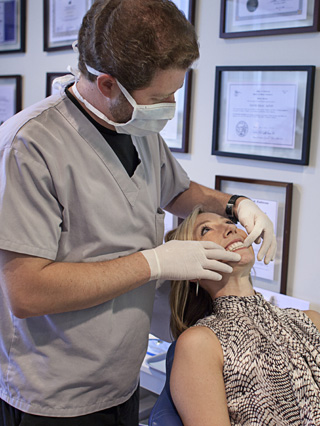 Dr. Alpan earned his Doctor of Dental Surgery (DDS) degree from the University of the Pacific (UOP) School of Dentistry in San Francisco and became licensed to practice dentistry in California and Nevada in 1996. After completing the orthodontic training program at UOP in 1998, he received his Orthodontic Specialty Certificate. He earned his Master’s of Science degree in Dentistry (MSD), and wrote his master’s thesis on the results of a two-year TMJ research project.

Dr. Alpan has an inexhaustible passion for practicing orthodontics: “I decided to specialize in orthodontics because I love the challenges and rewards of improving a person’s smile along with their self-esteem. Every patient leaves our office with a bigger, brighter and more youthful smile, and with more self-confidence. Our team strives to make every patient feel cared for in a fun, friendly and warm environment.”

When Dr. Alpan is not working, he spends time with his family and friends. Most of his time is spent with his son Zephyr, and his daughter Ambryn. His family is a priority, and they are usually celebrating some birthday or holiday on the weekends. A few of his hobbies are reading, working out, mountain biking, traveling, skeet shooting, watching movies, & racing cars. Dr. Alpan races with Porsche Owners Club, NASA, Chumpcars, Speed Ventures, BMW CCA, & Pirelli Cup Competent Motorsports.

Dr. Alpan is a speaker and leading expert KOL (Key Opinion Leader) for many technology companies like Acceledent and Propel. click here to read more!

He founded Aesthetic Orthodontics in Los Angeles, Beverly Hills & Las Vegas in 1999. In 2012, Aesthetic Orthodontics became Alpan Orthodontics.Three years later, Dr. Alpan transitioned out of Las Vegas and was only practicing in Los Angeles and Beverly Hills. In 2017, the Beverly Hills location was moved to Century City and the Woodland Hills office was added the following year. Every member of his team joins him in participating in continuing education courses on an annual basis to keep current with the most modern orthodontic & TMJ treatment methods available.

INVISALIGN
In 1999, Dr. Alpan became one of the first certified Invisalign providers worldwide. After hundreds of successful treatment outcomes, Align Technology invited Dr. Alpan to teach other orthodontists and dentists how to implement the Invisalign system into their practice. Since then, he has taught over 10,000 dentists & over 1,000 orthodontists how to use Invisalign to its full potential. He served as a consultant and was an integral part of the Clinical Education Department for Align Technology for over six years. With this extensive knowledge, Dr. Alpan decided to then focus solely on his private practice, and has since successfully treated thousands of patients with Invisalign.

INCOGNITO
In 1996, Dr. Alpan started treating patients with lingual braces as an orthodontic resident. After many years of working with various lingual bracket systems (3M Unitek Creekmore, Ormco AOA lingual, Lingualcare, I-braces), he became the #1 provider for Incognito lingual braces in Los Angeles, Century City & Woodland Hills. Dr. Alpan works closely with 3M Unitek, the manufacturer of Incognito lingual braces, & has been invited to be a clinical/technical consultant to help improve the Incognito system. Dr. Alpan was invited to be a member of the Incognito Center of Excellence after successfully completing hundreds of Incognito patients with incredible results. As a result, 3M Unitek invited Dr. Alpan in 2014 to be one of the founding members of the Golden Circle of Excellence group where he presents annually multiple complex treatment outcomes. After his Incognito with surgery and acceleration presentation, he was invited to speak at the Incognito Annual Users Meeting in 2015.

INSIGNIA 3D DIGITAL
Dr. Alpan started using Damon self-ligating braces in 1996 & is now the #1 provider in Los Angeles, Century City and Woodland Hills for the Damon self-ligating braces with the Insignia 3D digital set up. Insignia offers 3D digital set ups to visualize the treatment outcome before ever treating the teeth. Insignia allows for treatment to be more customizable, accurate, precise, less painful, faster, require less visits and personalized to specifically design and enhance smiles. Dr. Alpan was a member of the Ormco Insiders group for 10 years, a select group of orthodontists from around the world that meet biannually to make suggestions and discuss improvements for products manufactured by Ormco.